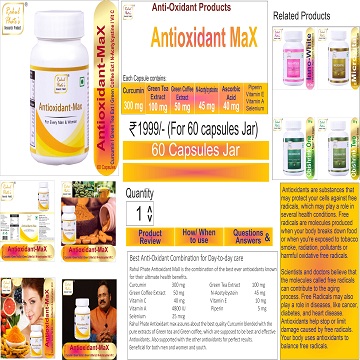 We keep talking about the pollution, chemical changes in the atmosphere, and the effects of these changes leading to multiple health issues. Air pollution is one of the major concerns. High levels of air pollution can increase the risk of heart attack, allergic respiratory problems, and coughing, wheezing, many times breathing problems. The pollutants may irritate the eyes, nose, and throat. Also, the existing problems like asthma, lung complications, and heart problems may get aggravated with increased air pollution.

Let us discuss here the 7 Advantages of Antioxidant Max, the best way of fighting against pollutants and free radicals for youthful living, Rahul Phate.

Similarly, another bad habit that exposes us to a higher level of free radicals and pollutants is smoking. Lungs can be badly affected by pollutants. Smoking can affect the lungs to a great extent. Tobacco smoke carries ample oxidative free radicals and pollutants to the lungs and they can damage the airways and the alveoli, the small sacks in lungs. Chronic obstructive pulmonary disease (COPD) may also be caused by smoking, also it is reported that the maximum cases of lung cancer are because of tobacco smoking.

7 Advantages of Antioxidant Max, the best way of fighting against pollutants and free radicals for youthful living, Rahul Phate, toxic free radical generators and their effects.

Looking at several problems associated with pollution and smoking, we can surely say that we need Antioxidants to fight against the effects of Free radicals, and instead of going for some synthetics as antioxidants, let us look into our surroundings and we will find that several natural sources feed us with the excellent quality antioxidants.

Turmeric, Carrots, papaya, green tea, green coffee and several other things provide us with the best quality antioxidants. Only thing is, the quantity of antioxidants available through the eatables is very less and we may have to consume huge quantities of these stuffs to achieve the health benefits of the Antioxidants. That is why; we have to work upon the extracts taken from these naturals, which become the concentrated source of the antioxidants.

While formulating Antioxidant Max, Rahul Phate has studied the nature of the Antioxidants and the natural sources. Turmeric, Green tea and Green coffee are the best sources of available antioxidants, which can cater best protection and health benefit against the free radicals, hazardous chemicals, tobacco smoke and damaging air pollutants.

7 Advantages of Antioxidant Max, the best way of fighting against pollutants and free radicals for youthful living, Rahul Phate, Best ever natural antioxidants.

Rahul Phate Antioxidant MaX is specifically formulated with these three natural extracts and is supported with other very important and effective antioxidants.

7 Advantages of Antioxidant Max, the best way of fighting against pollutants and free radicals for youthful living, Rahul Phate, Complete aura of Antioxidants for healthy living.

The most important of all is, it protects the thyroid gland from oxidative stress and is necessary for thyroid hormone production. Furthermore, selenium may boost the immune system as selenium is actually required for the proper functioning of the immune system.  Foods rich in selenium are seafood, mushrooms, and nuts.